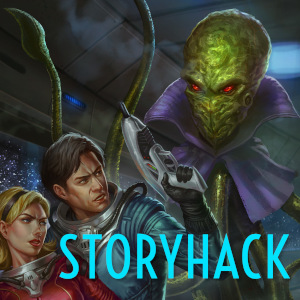 O'Hare had embarked on his strangest case. For he was on the trail of a man who combined business with pleasure by insuring his victims before killing them. And When O'Hare caught up with this homicide host, he found his quarry about to sacrifice another beautiful girl on the altar of greed.
Episode 38 - 10/21/2022

The Cronin Matter, from Yours Truly, Johnny Dollar

Jupiter Jones, naked and helpless in the slime of that vile world, cursed the space warp that had flung him down among its groveling mutants. For their rising, exited whispers proclaimed him a knight in shining armor -- the bright weapon in his hands their only hope against the vicious octopods who enslaved them! Episode 36 is "Sword of Fire" by Emmett McDowell, first published in the Winter 1949 issue of Planet Stories, and now is in the public domain.
Episode 35 - 08/21/2022

After much too long of a hiatus, the podcast is back with a boxing story, "Leather Larceny" by Larry Sternig. "This kid they practically dragged into the ring... made him fight... made him yellow... made him tough... made him champ."
Episode 34 - 04/03/2022

The Empress of Mars

Death stalked Darak of Werg at every step, but the Royal Bracelet and the Princess of Werg meant far more than one man’s life.
Episode 32 - 04/01/2022

Just before a bullet removed Leander Leffwell from the living, that Beantown screwball had completed his radio for talking with the dead. And to spot Leander’s sponsor, Snooty Piper set out to tune himself in on hell’s black network.
Episode 31 - 03/31/2022

Horror filled Dr. Ames as the insect horde swooped down on the helpless village. Could nothing stop their awful attack?
Episode 30 - 03/30/2022

Would you laugh if something followed you around your home- something cold and sneaky, that wasn’t even there when you turned your head?
Episode 29 - 03/29/2022

“Keep going!” roared Thomas. “Get in there and clean out those rotors or I’ll shoot you down!” Webb climbed desperately, his body buffeted by the suction from the giant wheel.
Episode 28 - 03/28/2022

As a newspaperman, he couldn’t decently or ethically do anything about it. But as a man in love with the girl reporter, he had to make his move when she was threatened…
Episode 27 - 03/27/2022

Revolt of the Robots

Ambition gripped the mind of Tarra Greghold, and she sought to rule the world, unaware that a robot mind could become ambitious as well.
Episode 26 - 03/26/2022

Each warrior was given a sacred bundle, to keep and to pass on in reverence down through generations, never to open it, never to reveal what power lay within. Now, that generational secret is threatened, and it may be more dangerous than anyone could have imagined.
Episode 25 - 03/25/2022

Her land was old in evil and sorcery-and all who dwelt therein were ancient as the land… and equally cursed.
Episode 23 - 03/23/2022

A Knife in a Dark Hand

What happens when a roudy mining town decides it wants to be a city? Even more gunfights and mayhem than normal.
Episode 21 - 03/21/2022

A scientist is forced miles below the earth’s surface to hide from a deadly foe. But what he finds below is far more deadly than the mere gangsters he left above.
Episode 20 - 03/20/2022

The Terror by Night

A crime wave tears through the city, leaving the signature of a notorious criminal - The Scarlet Salamander.
Episode 16 - 03/16/2022

The Daughter of Thor (Part 2)

The Daughter of Thor (Part 1)

A strange sequence of events leads an American pilot and a Nazi officer to the mythical land of Valhalla.
Episode 11 - 03/11/2022

In which Sailor Steve Costigan says goodbye to his beloved Sea Girl then fights the frenchman who kicked his dog.
Episode 10 - 03/10/2022

Life in “Utopia” was beautiful, perfectly regulated to satisfy everyone’s needs and desires—except one.
Episode 9 - 03/09/2022

Something about the raw deal that this kid was getting made Dan Flaherty forget that he was supposed to be a hard guy. . .
Episode 8 - 03/08/2022

When you spend your life building sailing ships, you love them all the way to violence.
Episode 6 - 03/06/2022

Blood for the Vampire Dead

Was this then the horrible price Tim Croft must pay for his disbelief in devil-magic philtres?- forfeiture of his own lovely fiancee’s life-blood to the undead corpse of Haunted Hollow!
Episode 5 - 03/05/2022

An Adventure on Eros

As the creatures of a condemned man's dream, the Brotherhood of Black Evil arose from the dust of 800,000 years to weave its spell of criminal sorcery over those who knew the answer to the Gray Sphinx riddle.
Episode 3 - 03/03/2022

The Monster from Nowhere

This episode used to be number 12, but after the relaunch, is now number 2. It is a western, happening before law came to San Francisco. Written by Gordon Young, originally published in Adventure, February of 1919.
Episode 1 - 03/01/2022

I'm getting the podcast started back up. For those who are new to the podcast, I also explain what to expect.